WPST 94.5 MEDIUM EVENING WITH SILVIA ROSSI – A RECAP OF AN INCREDIBLE NIGHT 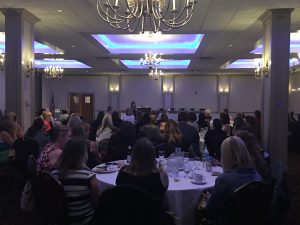 In late July I received a call from WPST 94.5 DJ Chris Rollins. It was completely out of the blue. She asked me if I could take part in a Medium Night Event they had set up at Diamonds Restaurant of Hamilton NJ. Unfortunately the original medium that agreed to do the event had fallen ill at the last minute. I was on the phone with Chris for a bit and I got a very comfortable feeling from her. I just wanted to make sure I could fit it into my busy schedule and it just so happened that a large group had cancelled that very same day ( there are no coincidences!) So I happily agreed to do the event. 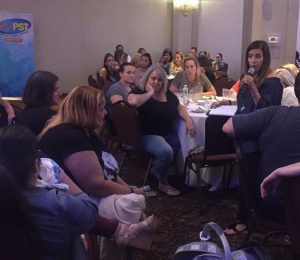 I arrived 20 min before 6pm and went in and met with Chris who was waiting for me outside at the entrance. Chris was warm and charming and immediately set me up in a private room so I could have something to eat beforehand and meditate. I started to feel the nervous energy that I get when reading for large crowds and I had just been informed that the event had SOLD OUT so we had a full house of 150 people! I was excited AND nervous! I really wanted to be calm, meditated and ready to go by showtime which was soon approaching. I finally finished and walked over to the events hall where Chris was waiting for me. I grabbed 2 glasses of water and the mic and went right into it! One of the first readings was for a woman who was right in front me who’s nephew Mike came through and had a message for his family and a very special for her…..I had seen a tree and asked “who planted a tree or made a memorial for him?” Well, it was her! And just like that the evening had started with a bang! There was a mother who heard from her deceased son (also Mike) who came through very powerfully describing his energetic personality. He was bouncing of the walls! And suddenly, I saw him kneel in front of his mom, put his head on her lap and tell her “I’m so sorry, Ma”. An overwhelming feeling came over me to do that very exact thing came over me and I found myself kneeling in front of her, resting my head on her lap, all the while describing to her this is what her son was instructing me to do. Then I said very softly, “I’m so sorry Ma, please forgive me”. No sooner those words came out of my mouth, I heard another woman at the same table gasp and start crying uncontrollably. It was his sister. His mom then described he would do that very exact thing when he had messed up. Mike had passed away of substance abuse and he just asked his mother to forgive him in the very manner he did when he was alive on earth. Incredible! Towards the back of the room, there was a young lady who had lost her father and I went right up to her and said, “Your dad wants me to do this” and I raised her chin with my middle and index fingers. This happened so quickly that I had no time to process the importance of this message. The young woman broke down crying and it was a few minutes before she could respond. When she finally composed herself enough to be able to talk she said her father’s last words to her were “Keep your chin up”……WOW!

To say that this night was special is an understatement. It was amazing! So many people were moved by the messages that came through, even if those people who did not receive messages. The air in the room that night was electric! Thank you to Chris Rolling and WPST for inviting me to be a part of this special evening and a big thanks to all those who came out and welcomed me into their lives. And most importantly I thank God for always giving me the strength to do this very meaningful work. 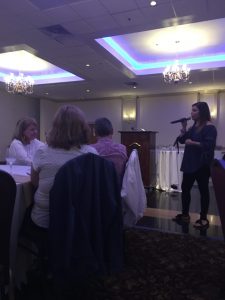