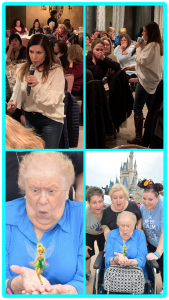 On the evening of March 7th I walked into Carlucci’s Waterfront Restaurant to participate in my second audience reading for WPST 94.5 and was greeted by their popular DJ Chris Rollins and escorted into the stately banquet room where roughly 100 people were seated for dinner and a reading by me. The energy was electrified and heavy with expectation from the audience. Once I grabbed the mic after being introduced by Chris I was off to the races with incoming messages from the beyond! I approached a mother and daughter who’s mother/grandmother (respectively) was communicating with them through me. Despite suffering and passing on from an arduous illness,  she wanted to portray that she was more than ok by picturing herself in her home at the Jersey Shore. She loved her home and wanted to let her family know she was in her little slice of heaven. The night continued with rapid fire messages but then I came to a pause in between readings and I saw Cinderella’s Castle at Disney World, like the beginning of a Disney movie was playing in front of my eyes with Tinkerbell flying in her trademark arc atop the castle. No sooner did I mention this, than a woman raised her hand and started to cry. Fighting back tears, she described her mother who loved Disney World, where the family would vacation together with her…but her favorite character of all was….yep, you guessed it…TINKERBELL! I was stunned! The evening continued as I delivered so many more messages that were spot on and heart felt! Thank you to Chris Rollings and the staff at WPST 94.5 and Carlucci’s for an exciting and beautiful evening!! Stay tuned for future announcements on another WPST sponsored Dinner and a Medium Event!